This is like, a ginormously huge baseball card that features the then-manager of the Los Angeles Dodgers, Tommy Lasorda. 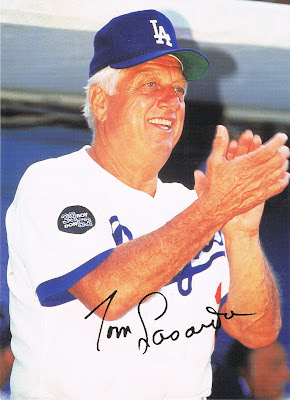 This thing is like the size of my head.

I'm only posting this because... well, I don't know. I forgot to post a blog last week and here I am and I don't have anything else prepared.

I never thought I'd want to know that his favorite food is pasta, but now that I do know that, well, let's just say that I'm glad I found out. 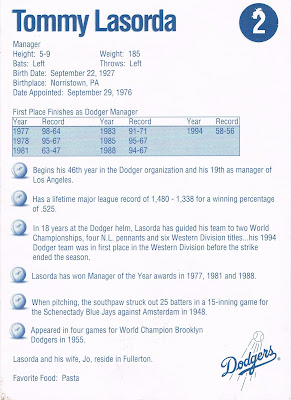 The end.
Posted by Jeremy Allison at 9:50 AM No comments:

What would life be without crappy ripoffs of crappy novelty groups?

Nothing, thats what. And, well, today's record is one of those.

Today's record is a ridiculous ripoff of the already tremendously terrible Alvin & the Chipmunks, by the group Shirley, Squirrely & Melvin and their album "LIVE", although I highly doubt that it's an actual "LIVE" recording. 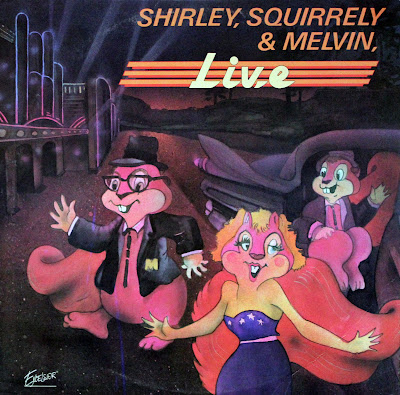 I wonder if the people who made this really thought they'd get away with such a blatant ripoff. Dave Seville should sue these guys.

Alright, so yeah. Those Alvin & the Chipmunks people were making a lot of money off of albums like Chipmunk Punk and the like, so a bunch of people started making these weird "high-pitched animals singing pop songs" records. I guess these people didn't think twice about the inevitable comparisons between squirrels and chipmunks.

Even the Simpsons made fun of this whole "Rodent Invasion". 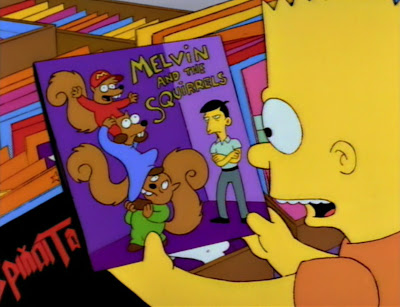 Anywhoo, let's talk about this album.

It really spoke to me.

It told me "WE CAN MAKE YOU HATE A BUDDY HOLLY SONG".

On that note, let's begin our track by track journey through this mess and try to make some sense out of this ridiculousness.

1) Introduction - Fake crowd noises and someone saying the group's name. So far this is my favorite track on the album.

2) Back in the USA - Our first real song is a Chuck Berry song. One of these squirrels implores us to "COME ON AND CLAP YOUR HANDS". Sorry, but no. I refuse to put my hands together to make such a noise.

3) It's So Easy - Ah, the aforementioned Buddy Holly song. This just makes me sad. If they really wanted to do "ONE FOR BUDDAY!", then they should have done him the favor of leaving it alone. Now whenever I hear the supremely superior original version, this crappy one will pop into my head. Ugh. Don't listen to this version unless you want your heart to cry.

4) The Gambler (feat. Denny Richards) - Okay, this one is just ludicrous. LUDICROUS, I SAY! This cover of the classic song features the alternate Hell-on-Earth-Universe version of Kenny Rogers -- Denny Richards. Now, are they REALLY trying to make us think that Denny Richards is a real person? I'm not convinced. Also, should squirrels be singing songs about drinking and gambling? Can these squirrels even wrap their tiny little brains around the importance of this song? Am I looking too much into this?

5) Mercedes Benz - This is a Janis Joplin song. It is an a capella song. Now, I don't really like Janis Joplin all that much, but still. Come on. These people are on a mission to ruin every single song from the past 60 years with high-pitched squirrels, and by golly, they're gonna do it.

6) Boulevard - Okay, here's a Jackson Browne song. I hate it. You hate it. We all hate it. Let's all hate it some more by making squirrels sing it. Whee!

8) Blue Suede Shoes - Why? Because Elvis sounds SO MUCH BETTER when you up the pitch 3 and a half notches.

10) Get Back - Oh yeah. Because we haven't ruined everything good in the world yet, let's ruin the Beatles. Yippee!

11) Love Lives On - Finally. The end. And, unsurprisingly, another crappy crappiness of craptoscity. Almost as bad as Ron Cey.

Thanks a lot, Canada, for ruining everything good in music. Again. Was ANVIL not enough!?

Shirley, Squirrely & Melvin on the other hand... Blech. 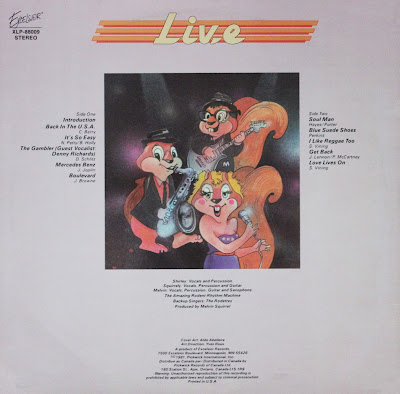 Today, though, the learning ends. And what better way to close out this collegiate experience than with a Wacky Races slide comic?

THERE IS NO BETTER WAY.

So, it comes to this. Our final Kenner Give-a-Show Slide Comic is from the files of Wacky Races and is entitled "Bridge Out".

In the first panel we see our old psychotic friend Penelope Pitstop, the evil Dick Dastardly, and those spooky Munster-like people coming to a closed road because of a downed bridge. They seem very disappointed about this as evidenced by their exclamation of "WELL THAT ENDS THE RACE".

That one Munster-y/Addams Familyish guy wants to know where could they "SCARE UP A BRIDGE".

Then, some Paul Bunyan guy in a wooden car with his pet Beaver come plowing through shouting through his teeth...

"MAKE WAY FOR THE BUZZ WAGON"

Paul Bunyan then plows through a bunch of green pine trees (and one blue one), knocking them over, and chopping them up, destroying entire ecosystems in a few short blows.

Apparently he seems to have constructed a bridge out of trees that used to be bird and chipmunk houses, and some professor in his (or her) helicopter car thingy takes it away.

The ever-smiling Paul Bunyany man and his Beaver are left behind to "CATCH UP" as everybody else Wacky Races along across the freshly laid bridge.

Thank you, and good night.

CLICK on the photo(s) to enable the ENLARGE-O-MATIC PHOTO EMBIGGENER®!! 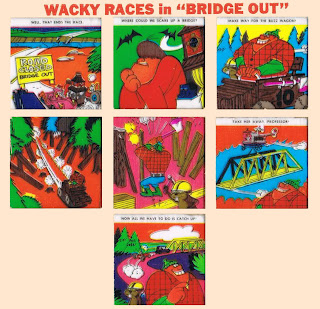 Last week, I shared with you the soundtrack for Elaine May's excellent film, The Heartbreak Kid. The day after that, my awesome co-worker and super cool filmmaker Dean saw today's item on eBay, and I immediately bought it.

Today's item is a one-sided 7" record of two (although it says there are three cuts) Radio Spots for a double feature of the 1972 films Sleuth and The Heartbreak Kid. 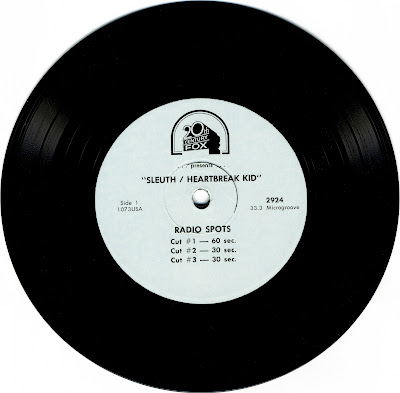 Back in the 1960s and 70s, most films were shown on a double bill. To promote showings of the films, they would send movie theaters these records, as well as pressbooks. Unlike the way films are promoted now, it would be completely up to the theater owners to purchase radio air time and newspaper ads to promote the showings.

I've already explained the greatness of The Heartbreak Kid to you, but unlike that film, I have never seen and have no idea what Sleuth is about.

Let's find out together!

Oh. So, it's a Michael Caine murder-mystery thingamajig. Huh. Watching this with The Heartbreak Kid seems like an odd double feature, but hey... what do I know? I guess I'll have to rent this one out from work and try it out as a double feature.

In the meantime, check out the two Radio Spots for Sleuth and The Heartbreak Kid!

Enjoy!
Posted by Jeremy Allison at 4:17 PM No comments: